A formal grammar is a set of rules that are used to generate and identify patterns of strings in a language.

CFGs are studied in fields of theoretical computer science, compiler design, and linguistics. They are used to describe programming languages and parser programs in compilers can be generated automatically from CFGs.

Deriving a String from a CFG

We want a CFG that generates the language \(\{ a^n b^n : n \ge 0 \}\). In other words, we want to accept strings that contain a sequence of symbols a followed by the exact same number of symbols b.

The formal definition of the CFG that solves this problem is as follows:

The following derivation tree is an alternative way of generating the desired string: 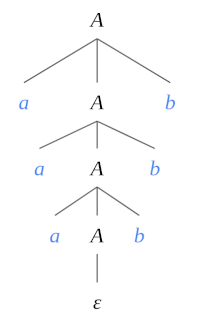 In Clojure, we can use the Instaparse package to create a parser from a CFG.

First, we must import the required dependencies and define some auxilary functions:

Given a grammar, turning it into an executable parser is as simple as typing the grammar. Using the grammar from the previous example:

The parser object behaves like a function that returns the corresponding derivation tree when applied with an input string as argument:

If the provided string is not syntactically correct it returns an instaparse.gll.Failure object that shows the corresponding error message when displayed: